The Battle of Saraighat was fought during the reign of Ahom king Chakradhvaj Sinha in 1671. The Ahom general Lachit Barphukan inflicted a crushing defeat on the Mughal General Ram Singh. The victory on the bank of the river Brahmaputra at Saraighat earned for Lachit Barphukan immortal fame. It was one of the most outstanding naval victories of the Ahoms against the Mughals.

The Ahoms had a powerful naval fleet and they had special category of officers to look into its function. There were different officials along with their Paiks(force) who were placed at strategic places on the bank of the Brahmaputra to govern the territory as well as to guard against the encroachment by others communities. The royal fleet of boats was in charge of the officer called as Naoyaichhe. He had one thousand men under him to look after this fleet. The royal boats were constructed under the supervision of the officer called as Naosalya Phukan who also had a thousand men 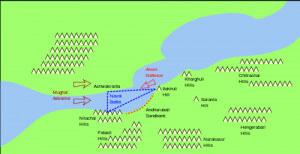 for building the boats

The Treaty of Ghilajharighat was signed in the year 1663 but the terms of treaty was so humiliating for Ahom Kingdom that they started preparing to take the revenge of humiliation inflicted on them.

Mughal Army led by Ram Singh as they had a greater number of soldiers and cavalierly.

Ahom warships from all sides that smashed into the Mughal warships at Amrajuli on the north bank, opposite Kamakhya hills. The triangle in the river, between Itakhuli, Kamakhya and Aswakranta was filled with men and boat. The Ahoms spanned the river over an improviso bridge of boats and resorted to a combined front and rear attack. The Mughal admiral Munnawar Khan, smoking a hookah was killed by a gunshot from the back, throwing the Mughals out of gear. They suffered the loss of three top-ranking amirs, and another 4000 dead.