The British did not try to expand their territory to the northeast of India because they followed a policy of non intervention towards the Ahom kingdom. It was only when the Burmese had established authority in Assam through a series of invasions that the British were compelled to abandon their policy of non-intervention towards Assam. The  first  Anglo-Burmese  war  (1824-26)  paved  the  way  for  the establishment of British administration in Assam.

The Treaty of Yandabu (To be explained latter) treaty brought peace between East India Company and the King of Ava that ended the first Anglo-Burmese war.The agreement was signed on February 24,1826 by General Sir Archibald Campbell on the British side and by Governor of Legaing Maha Min Hla Kyaw Htin of the Burmese side. This treaty starts the British Rule in Assam.

As per this treaty:

Britishers retained Lower Assam and placed Upper Assam in the hands of Ahom King Purandar Singha on a tribute.

In 1828, the Kachari kingdom was annexed under the Doctrine of Lapse after the king Govinda Chandra was killed. In 1832, the Khasi king surrendered and the British increased their influence over the Jaintia ruler. In 1833, upper Assam became a British protectorate under the erstwhile ruler of the Ahom kingdom, Purandhar Singha, but in 1838 the region was formally annexed into the British empire. With the annexation of the Maran/Matak territory in the east in 1839, the annexation of Assam was complete. 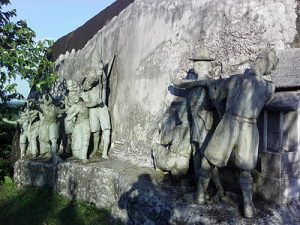