The ancient name of Assam was Pragiyotishpura – the city of Eastern Light, which later changed to Kamrupa – the land where Kamdeva, the god of love was reborn. Assam traces her history back to at least 2500 years B.C., when high civilization flourished in the land. During the era of Mahabharata, this land was ruled by Non Aryans, the first known ruler being Mahiranga Danava of Danava dynasty. Bhagadutta, son of Naraka who participated in the great Kurukshetra war as an ally of the Kauravas, was the most powerful among the Danava Kings.
In the mid 7 Century A.D. the most illustrious monarch of Varmana dynasty Kumar Bhaskar Varmana raised ancient Assam from obscurity and placed her in the forefront of Indian politics. Kumar Bhaskar Varmana was a close friend of King Harshavardhana. During this period Hiuen Tsang came to Assam and wrote about Assam and her people.

The dynasty of Pralamba assumed power at around 800 A.D. There were around twenty rulers from this dynasty. By 1000 A.D, the Pal dynasty came into focus with the rule of Brahma Pal. Several rulers from this dynasty ruled till the 11 century. By 1100 A.D., there again developed a reign of confusion in the kingdom of Kamrupa with no definite ruler. The kingdom of Kamarupa disintegrated, resulting in the emergence of many petty chiefs at different places.

The Ahoms belonged to the Tai or Shan section of the Siamese – Chinese branch of the Sino-Tibetans. They arrived in Assam through North Burma, along the Noa Dihing River. During their six hundred years rule, they were able to consolidate their power by bringing the different rulers or chiefs under their dominion. When the Ahoms were consolidating their position in Assam, they came into conflict with the ruling Kachari, Chutiya and Jaintia kingdoms. The Chutiyas were in power in northeastern Assam and parts of Arunachal Pradesh. During the period of Sukapha the country comprised of Buridihing in the east,Dikhou in the South, in the western side, there was river Brahmaputra and Naga Hills in the east. Swargadeo Suhungmung extended its boundary up to Karatoya River and Dhaca and makes the Ahom state a great kingdom by defeating the Mughals in the Battle of Itakhuli, King Gadadhar Singha extended the Ahom territory up to Hajo.

With the treaty of Yandaboo in 1826, the fate of Assam passed into the hands of the British.  Now began a history in Assam which was a series of annexation and secessions. The British annexed Cachar in 1832 and Jaintia Hills in 1835. In 1874, Assam became a separate province with Shillong as its capital. Sylhet was merged with East Bengal on partition of India.

This is the Basic introduction of Assam History, the questions in APSC Prelims and Mains are observed to be in detail and thus we have bifurcated the syllabus of History into relevant topics and detailed notes will be provided by APSCNotes team. 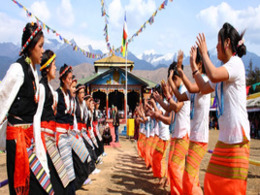