It is often said that folk dance is the best manifestation of the culture and tradition of a particular place. The best example to this statement can be seen in the various ethnic dance forms that are prevalent in the different corners of Assam. The state is home to a number of indigenous tribes and races, each of which has its own fairs and festivals. This has led to the propagation of innumerous dance forms throughout the region. The different dance forms in the state can be broadly categorized under two headings, classical dances and folk dances.

Bihu dance is the most popular folk dance of Assam and as its very name suggests, is related to the Bihu festival, which is celebrated with pomp and glory within the state. The festival is mainly a celebration of the different phases of cultivation and is observed by all the Assamese, irrespective of their caste and creed. There are three types of Bihu festivals celebrated in Assam – one in the month of April (Bohaag Bihu), one in mid-January (Maagh Bihu) and the third one in mid-October (Kaati Bihu). 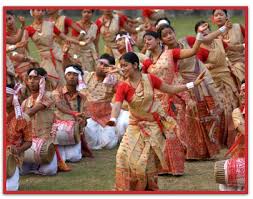 One of the major forms of merriments during Bihu festival comprises of dancing to the enthralling beats of Dhol and Pepa (buffalo hornpipe). Apart from Dhol and Pepa, other traditional instruments used in the dance include tala (a cymbal), gogona (a reed and bamboo instrument) and toka (a bamboo clapper).Young girls dressed in the traditional attire of the state, Mekhela Chaddar, and adorned with typical Assamese jewelry, like the Gaam Kharu and the Loka- paro, sway to the tunes and the beats of the local Assamese songs. Boys, on the other hand, wear Dhoti and Gamocha.

Bihu geet (songs), sung during the festive season, accompany Bihu dance and have become almost like a heritage for the people of the state, the lyrics being handed down from one generation to the next. The theme for the song may vary from welcoming the Assamese New Year to describing the daily life of a farmer, from historical references of invasions to Assam to contemporary socio-political commentary in a satirical way. Due to the intermingling of the different ethnic tribes and races, several forms of the Bihu dance have emerged in the state. However, the basic concept of the dance remains the same i.e. to express the desire to feel both pain and happiness.

The dance is mostly performed in open places (now-a-days in cultural gatherings also). The male members wear long traditional dresses and keep the rhythm with few traditional instruments: generally a drum, hung on shoulder; a flute and a pair of “Taal” (two metallic discs). The girls mostly perform the dancing part, holding each other’s waist and moving hands and legs forward and backward synchronously. 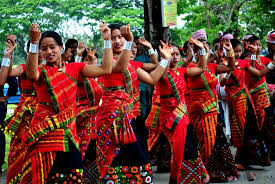 The dance gets its name from the cluster of bells worn round the ankles, which make a clanging noise. There are many variations of Jhumur. This dance is some times performed as a ritual worship of gods and goddesses, sometimes for courting and lovemaking, and yet again as a prayer for rainfall. This dance incorporates songs and dialogues, which depict the joys and sorrows, yearning and aspirations of the everyday lives of the common people. It is believed that Jhumur was originally a means of recreation between phases of tedious agricultural work. Probably the most entertaining form of Jhumur is the Bhaduria, performed as thanksgiving for a bountiful monsoon.

this is a dance in which young boys and girls of this tribe can participate for the praying of their holistic local deity for batter harvesting. There is a rule of swinging of the hips during the dance performance with a great passion. It is a dance which is not a folk dance but also an entertainment part of the Ali Ai Ligang festival of Mishing tribe. After the finishing of this dance program the people of Mishing tribe scarifies animals and offers them to deity. After that they all enjoy this feast.

Deodhani dance is a folk dance from the Indian state of Assam. It is as a solo or group performance. In the group performance, it essentially comprises 3 or 4 women. This dance form is associated with the worship of the snake goddess Manasa or Maroi. A Deodhani dance is generally performed to the accompaniment of songs sung by an oja, an Assamese traditional chorus leader, during the dance.

Barpeta’s Bhortal Nritya is one of the popular traditional dances of Assam which was developed by a well known Satriya artist Narahari Burha Bbakat. It is an extension of Sankari culture. In this dance Six to ten dancers equipped with cymbols perform to the first bit of ‘7hiya Nom” and produces a number of attractive and colourful formations by displaying the cymbols. The dance is performed during the festival season like Bihu. It can be seen in and around Barpeta and in the stages of Guwahati Bihu sanmilan.It is basically performed in groups. It is performed to a very fast beat which is known as ‘ 7hiya Nom’. People of all age group can enjoy this dance. Some of the best performances of this dance can be seen during Bihu festival when the stage performances held in Guwahati and Barpeta. The Barpeta’s Bhortal Nritya is a mirror image of the rich cultural heritage of Assam.

Generally accompanying bhawuas, i.e. theatrical performances of the type of miracle plays of Europe in the middle ages.

These dances verging on acrobatics are performed to tunes of vigorous music provided with drums and cymbals. Masks are sometimes used.

Bagurumba is a folk dance of indigenous Bodo tribe in Assam and Northeast India. It is a traditional dance which is traditionally inherent to one generation to another generations. The Bodo women perform the Bagurumba dance with their colourful dokhna, jwmgra (fasra) and aronai. The Bagurumba dance is accepted as main traditional dance of Bodo people. But there are some other important dances like- Bardwisikhla dance, Mwsaglangnai dance, Dahal-tungri sibnai dance, Sikri sikla dance, Daosri delai dance, Sa-gwlao mwsanai, Kopri sibnai mwsanai and so on. All these dances are known as Kristi dance. It is also accompanied by musical instruments like kham (a long drum, made of wood and goat skin or other animal’s skin), sifung (flute, made of bamboo), jota (made of iron/tama), serja (a bowed instrument, made of wood and animals skin), and gongwna (made of bamboo), tharkha (a piece of split bamboo).

This is a typical folk dance of Assam, performed by two groups of men and women, who stand in two rows.