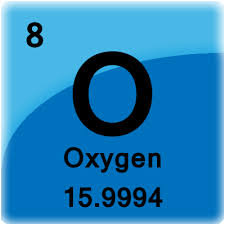 Using heat:
Oxygen in lab is prepared by heating the mixture of powdered potassium chlorate and manganese dioxide in the ratio 4:1 in a hard glass test tube. The oxygen gas is observed in a gas jar through the downward displacement of water. The reaction involved is given below:

Without heat:
The dry sodium peroxide is taken in a conical flask and the apparatus is fitted as shown in figure. The two necks of woulfe’s bottle is tighten up with cork so that no air enters from outside. It is connected with the delivery tube to a water trough containing water. Water is poured slowly from the thistle funnel. Here sodium peroxide reacts with water at ordinary temperature to give hydrogen gas. The hydrogen gas thus formed is collected in a gas jar through delivery tube by the downward displacement of water. The reaction takes place as below:

– Oxygen is colorless, odourless and tasteless gas.
– It is pale blue color in liquid and solid state.
– It is slightly soluble in water.
– It is heavier than air.

Combustibility: It does not burn itself but it supports for combustion. Oxygen requires high initial heating due to its high bond dissociation energy of 493.4KJmol– between the O=O atoms.

Action with Nitrogen: Oxygen reacts with nitrogen at high temperature to give nitrogen dioxide.

Action with ammonia: Oxygen reacts with ammonia to give nitric oxide and water. It is a reaction involved in manufacture of nitric acid in Ostwald’s process.

Action with glucose: Glucose reacts with oxygen to give carbon dioxide, water and energy. This reaction takes place inside the human body.

Oxygen combines with many metals to form their respective oxides.

Action with iron: Oxygen when reacted with iron gives ferrous oxide. When excess of oxygen is passed, it gives ferrosoferic oxide and further addition of oxygen gives ferric oxide. To be discused

When oxygen is reacted with oxygen in presence of water, rust is formed.