ð  India signed an agreement with the World Bank for a $200 million loan for implementing the National Nutrition Mission across 315 districts of the country. 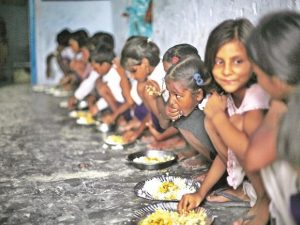 ð  Approved by the Union Cabinet last year, the mission aims at reaching 10 crore beneficiaries, mainly children upto the age of six years, pregnant women and lactating mothers and adolescent girls. The programme will be implemented in three phases between 2017 and 2020 across all districts of the country.

ð  The mission targets a 2% reduction in both under-nutrition and low birth weight per annum. It also aims to bring down anaemia among young children, women and adolescent girls by 3% per year until 2020.

ð  The government will also strive to reduce the prevalence of stunting from the current level of 38.4% (as per the National Family Health Survey 4) to 25% by 2022.

ð  The National Nutrition Mission has an approved budget of ₹9046.17 crore. The total contribution of the Centre will be ₹2,849.54 crore and nearly ₹1,700 crore will be contributed by the State governments. The remaining amount will be funded through the government’s tie-up with multilateral agencies such as the World Bank.

ð   In 15 months time, Survey of India, the country’s principal mapping agency, will map the entire stretch of the Ganga using geographic information system (GIS) technology and provide high-resolution maps to the government.

ð  It will help river cleaning authorities in getting minute details of sewage and effluent discharge outlets and identify pollution hot-spots up to 10 km on both sides of the river.

ð  Since the project will map sewage outlets and other discharges from all units (industrial, commercial and others) from the source to the public drainage network, it will help in monitoring of polluting sources and quicken the process of taking appropriate action.

ð  In the first phase, 75 discipline-specific National Resource Centres have been identified which are tasked to prepare online training material with focus on latest developments in the discipline, new & emerging trends, pedagogical improvements and methodologies for transacting revised curriculum.

ð  Under this initiative, all in-service teachers, irrespective of their subject and seniority will have an enabling opportunity to keep abreast of the latest developments in their disciplines through the technology based online refresher course.

ð  In the first phase, 75 discipline-specific National Resource Centres (NRCs) have been identified.