A.H. Dani (1960) has devided the Neolithic Cultures of Assam into six distinct zones: namely Cachar Hills Zone, Sadiya Frontiers, Naga Hills Zone, Khasi Hills Zone, Garo Hills Zone, and Brahmaputra Valley Zone. Regarding the discovery of Neolithic tools and implements in the Brahmaputra valley, it has been written that the materials
available for study are few and far between. , whereas he made the classification of tool types under seven categories such as facetted tools, shouldered tools, splayed axe, rounded but axe with broad cutting edge, wedges and grooved hammer stones.

On the basis of his analytical study of tool types, he was also of the opinion that Southeast Asian elements came in different waves at different times through Myanmar (former Burma) and a definite chronology could be ascribed on the basis of a black polished ware associated with the specialised tools of the later complexes of Burma.

Daojali Hading is an important Neolithic site in Dima Hasao District of Assam.Extensive digging at this site has yielded polished stone tools, ceramics and kitchen items such as grinders, pestles and mortars.

Sarutaru is an important Neolithic site in Kamrup district, Assam.It  is a hamlet situated at 25 km southeast of Guwahati, and the Neolithic site lies on the top of a small hillock about 125 m high from the foothill.

Marakdola is a low mound situated at distance of 1 km from the Neolithic site of Sarutaru. 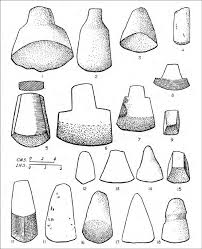