The Varman dynasty (350-650), the first historical rulers of Kamarupa; was established by Pushya Varman, a contemporary of Samudragupta. This dynasty became vassals of the Gupta Empire, but as the power of the Guptas waned, Mahendra Varman (470-494) performed two horse sacrifices and threw off the imperial yoke. The first of the three Kamarupa dynasties, the Varmans were followed by the Mlechchha and then the Pala dynasties.

The genealogy of the Varman dynasty appears most fully in the Dubi and Nidhanpur copper plate inscriptions of the last Varman king, Bhaskar Varman (650-655), where Pushya Varman is named the founder. The Dubi copper plate inscription of Bhaskar Varman asserts that Pushya Varman was born in the family of Naraka, Bhagadatta and Vajradatta (as did the other two Kamarupa dynasties) three thousand years after these mythical ancestors. The middle or Mlechha (Mech) dynasty, though claim same descent, are native tribal rulers. K.L. Barua opines that there was a Mlechha (i.e., Mech) revolt in Kamarupa and Salastambha, the leader or governor of the Mlecchas usurped the throne by deposing Bhaskar Varman’s immediate successor Avanti Varman.

The most illustrious of this dynasty was the last, Bhaskar Varman, who claimed be a descendant from god Vishnu and referred to as “lord of eastern India”. He accompanied King Harshavardhana to religious processions from Pataliputra to Kannauj.

Kings of Varman dynasty maintained both diplomatic and matrimonial relations with other countries of Aryavarta. Pushya Varman who himself named after king Pushyamitra Shunga, named his son Samudra Varman after king Samudragupta in appreciations of kings of Aryavarta. King Bala Varman organised Swayamvara for his daughter Amrita Prabha; which was attended by princes of different countries. Princess eventually chosen prince of Kashmir Meghavahana as her groom. The alliance between king Harsha of Thanesar and Bhaskar Varman lead to spread of political influence of later to entire eastern India.

The Mlechchha Dynasty (c. 650 – 900) ruled Kamarupa from their capital at Hadapeshvar in the present-day Tezpur, Assam, after the fall of the Varman dynasty. The rulers were aboriginals, though their lineage from Narakasura was constructed to accord legitimacy to their rule. According to historical records, there were twenty one rulers in this dynasty but the line is obscure and the names of some intervening rulers are not known. The Mlechchha dynasty in Kamarupa was followed by the Pala kings. According to some historians, the remnant of the Mlechchha kingdom formed the later Kachari kingdom based in Dimapur and the Sutiya kingdom based in Sadiya after being driven south and east by Brahmapala of the Pala dynasty. The rulers of this dynasty are: Salasthamba (650-670), Vijaya alias Vigrahastambha, Harshadeva alias Harshavarman (725-745), Balavarman II, Salambha, Harjjaravarman (815-832), Vanamalavarmadeva (832-855), Jayamala alias Virabahu (855-860), Balavarman III (860-880) Tyagasimha (890-900).

Pala dynasty, ruling dynasty in Bihar and Bengal, India, from the 8th to the 12th century. Its founder, Gopala, was a local chieftain who rose to power in the mid-8th century during a period of anarchy. His successor, Dharmapala (reigned c. 770–810), greatly expanded the kingdom and for a while was in control of Kannauj. Pala power was maintained under Devapala (reigned c. 810–850), who carried out raids in the north, the Deccan, and the peninsula; but thereafter the dynasty declined in power, and Mahendrapala, the Gurjara-Pratihara emperor of Kannauj in the late 9th and early 10th centuries, penetrated as far as northern Bengal. Pala strength was restored by Mahipala I (reigned c. 988–1038), whose influence reached as far as Varanasi, but on his death the kingdom again weakened.

Ramapala (reigned c. 1077–1120), the last important Pala king, did much to strengthen the dynasty in Bengal and expanded its power in Assam and Orissa; he is the hero of a Sanskrit historical poem, the Ramacarita of Sandhyakara. On his death, however, the dynasty was virtually eclipsed by the rising power of the Senas, though Pala kings continued to rule in southern Bihar for 40 years. The main capital of the Palas appears to have been Mudgagiri (now Munger) in eastern Bihar.

The Khen dynasty of Assam replaced the Pala dynasty in the 12th century. Their accession marks the end of the Kamarupa kingdom, and the beginning of the Kamata kingdom, when Sandhya moved his capital from Kamarupanagara to Kamatapur in about 1250.

According to the Gosani Mangala (1823), the Khen rulers had a humble origin, implying that they were probably local non-Aryan chieftains that rose to power after the fall of the Palas. Ethnically, they are possibly related to the Kheng people of nearby Bhutan. They worshipped Kamatashwari (also called Chandi or Bhavani), thus providing a break from the earlier dynasties that drew their lineage from Narakasura, the son of Vishnu. Along with the change in the deity, the Khen rulers moved the capital from Kamarupanagara to Kamatapura further west on the banks of the Dharla River. Under the patronage of Kamata rulers (e.g. Durlabh Narayan), some of the first examples of Assamese literature were composed.

The kingdom of Kamatapura finally fell to Alauddin Husain Shah in 1498. But Hussein Shah could not rule the kingdom— Bhuyan chiefs of the region, with the help of the Ahom king, Suhungmung, defeated the invaders in 1505. Soon control of the Kamata kingdom passed into the hands of the Koch dynasty.

The Sutiya Kingdom or Sadiya (1187-1673) was a state established by Birpal in 1187 in the areas comprising the present Indian states of Assam and Arunachal Pradesh. The kingdom absorbed the ancient Pal dynasty of Kamarupa and reigned for over 400 years in eastern Assam and Arunachal Pradesh with its capital at Sadiya. It became the dominant power in eastern Assam in the 12th century and remained so until the 16th century with its domain from Parshuram Kund in the east to Vishwanath in the west and in the process of its expansion had absorbed many local communities and tribes. 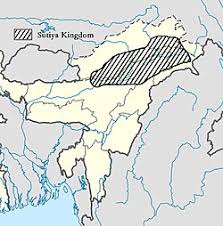 It controlled the present Assam districts of Lakhimpur, Dhemaji, Tinsukia, parts of Jorhat, Dibrugarh, Sonitpur and East Siang, Subansiri, Lower Dibang, Lohit districts of Arunachal Pradesh. The Sutiya are an ethnic group originally from Tibet and the Sichuan province of China.

Most illustrious of the Sutiya kings was Gaurinarayan (Ratnadhwajpal) son of Birpal. He brought many other Sutiya groups into his kingdom. In 1224 Ratnadhwajpal defeated Bhadrasena, the king of Swetagiri. Then he went on to subjugate Nyayapal and marched toward Kamatapur, where he formed an alliance with the Kamata ruler by marrying a princess. Then he marched to Dhaka, and made friends with the Gauda ruler. The hostilities with the Ahoms began when the Sutiya Kingdom expanded to the south and during which Ahom king, Sutuphaa, was killed by the Sutiya king during a friendly negotiation. This conflict triggered a number of battles between the two sides, which saw great loss of men and money. The simmering dispute often flared till 1524 when the Ahoms struck the Sutiya Kingdom at its weakest state, took Sadiya and killed the then king Nityapal. The Ahoms established their rule by instituting the position of Sadiyakhowa Gohain, a newly constituted position of frontier-governor in charge of Sadiya. But the Sutiya had dispersed to frontier regions, and continued raids against the Ahoms. It finally ended in 1673 when they fall under the domination of the Ahoms.