Fairs and Festivals of Assam

One of the major festivals that draws visitors from far and near is Majuli Festival in Assam, the gateway to the Northeast. The Majuli festival is held in Majuli, the largest river island in the world. Located on the river Brahmaputra in Assam, it has been a center of Vaishnavite culture in Assam since the 16th century. There are a large number of monasteries or Satras in the state which reflects its neo-Vaishnavite culture. The Majuli festival is marked by several cultural programs and exhibitions.

Held on the bank of the River Luit, the Majuli Festival is a major tourist attraction and lets the visitors have a glimpse of the culture and traditions of the island. The location is extremely picturesque and serves as a perfect venue for the festival. Several cultural programs are held during the course of the festival which shed light on the traditional customs and culture of the island. A food festival which displays local delicacies of the state and of the tribes in Majuli in particular is held during this time. The Majuli festival is also attended by artists and artisans who come to exhibit their handmade products. Some of these products include garments and traditional handicrafts, bamboo products and locally made cane. The festival is also marked by a host of other activities. Seminars are held along with discussions on various topics that seek to highlight the local issues within the state.

The Festival of Elephants in Kaziranga is an assembly which is aimed at increasing eco-tourism amongst human beings. The Elephant Festival is also intended to raise awareness about the elephant’s struggle for all kinds of limited resources with humans. The main objective of the Kaziranga Elephant Festival is to find out a solution to resolve the increasing man-elephant conflict.

The Magh Bihu festival of Assam is celebrated with great fervor by its entire populace. Characterized by merry making and feasting, this festival marks the end of the harvesting season when there is abundance of everything. This is the time when the hard working agricultural folk of the state sit down to reap the benefits of their labor. However, it must be pointed out that the Magh Bihu festival is not limited to the agricultural pockets of the state. Right from the smallest of villages to the big towns and cities of Assam, people celebrate this festival with great joy, though it must be mentioned that the mode of celebration differs from the villages to the cities.

The Magh Bihu is also referred to as Bhogali Bihu or the festival of food and is celebrated in the month of January. It is the time when winter sets out on its last course, making way for spring. The night before Magh Bihu Festival is called Uruka and is characterized by loads of merry making and community feasts. However, many of the religious minded folks of Assam choose to fast and pray on this night.

The Ambubachi Mela is celebrated in the capital city of Guwahati, in the northeastern state of Assam in India. The Ambubachi Mela is the most important festival of the Kamakhya Temple of Guwahati. The Ambubachi is a ritual of asceses observed with “Tantrik means”. It is believed that the presiding goddess of the temple, Devi Kamakhya, the Mother Shakti, goes through her annual cycle of menstruation during this time stretch.

During the Ambubachi Mela in Guwahati, the doors of the Kamakhya Temple remain closed for three days. It is believed that the Mother Earth becomes unclean for three days. During this time any kind of farming work is not taken on. Daily worships and other religious performances are also stopped during the Ambubachi Mela of Guwahati in Assam. After the completion of three days, the doors of the Kamakhya Temple are reopened. But the doors of the temple are reopened only after Devi Kamakhya is bathed and the other rituals are executed. It is then believed that the Mother Earth has retrieved her purity. This is purely a ritual of the Tantrik cult.

The Tea Festival is held in the district of Jorhat in the northeastern state of Assam in India. Jorhat is well-known for its extensive tea gardens, and is the nerve centre of the tea industry. Jorhat has the world famous Teklai Experimental Centre. In this place research work is carried out to find new varieties of tea and also the curative effects of green tea. The island of 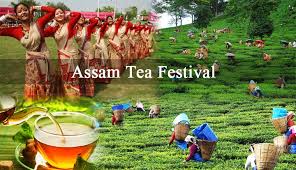