Rajput is a caste from the Indian subcontinent. The term Rajput covers various patrilineal clans historically associated with warriorhood: several clans claim Rajput status, although not all claims are universally accepted.  The term “Rajput” acquired its present meaning only in the 16th century, although it is also anachronistically used to describe the earlier lineages that emerged in northern India from 6th century onwards. In the 11th century, the term “rajaputra” appeared as a non-hereditary designation for royal officials. Gradually, the Rajputs emerged as a social class comprising people from a variety of ethnic and geographical backgrounds. During the 16th and 17th centuries, the membership of this class became largely hereditary, although new claims to Rajput status continued to be made in the later centuries. Several Rajput-ruled kingdoms played a significant role in many regions of central and northern India until the 20th century.

Scholarly opinions differ on when the term Rajput acquired hereditary connotations and came to denote a clan-based community. Historian Brajadulal Chattopadhyaya, based on his analysis of inscriptions (primarily from Rajasthan), believed that by the 12th century, the term “rajaputra” was associated with fortified settlements, kin-based landholding, and other features that later became indicative of the Rajput status. According to Chattopadhyaya, the title acquired “an element of heredity” from c. 1300. A later study by of 11th-14th century inscriptions from western and central India, by Michael B. Bednar, concludes that the designations such as “rajaputra”, “thakkura” and “rauta” were not necessarily hereditary during this period.

The Rajput kingdoms were disparate: loyalty to a clan was more important than allegiance to the wider Rajput social grouping, meaning that one clan would fight another. This and the internecine jostling for position that took place when a clan leader (raja) died meant that Rajput politics were fluid and prevented the formation of a coherent Rajput empire. The first major Rajput kingdom was the Sisodia-ruled kingdom of Mewar. However, the term “Rajput” has also been used as an anachronistic designation for the earlier Hindu dynasties that succeeded the Gurjara-Pratiharas, such as the Chahamanas (of Shakambhari, Nadol and Jalor), the Tomaras, the Chaulukyas, the Paramaras, the Gahadavalas, and the Chandelas. These dynasties confronted the Ghaznavid and Ghurid invaders during the 11th and 12th centuries. Although the Rajput identity did not exist at this time, these lineages were classified as aristocratic Rajput clans in the later times. Chittor Fort, built by a dynasty of Sisodia Rajputs, is one of the largest forts in India. In the 15th century, the Muslim sultans of Malwa and Gujarat put a joint effort to overcome the Mewar ruler Rana Kumbha but both the sultans were defeated. Subsequently, in 1518 the Rajput Mewar Kingdom under Rana Sanga achieved a major victory over Sultan Ibrahim Lodhi of Delhi Sultanate and afterwards Rana’s influence extended up to the striking distance of Pilia Khar in Agra. Accordingly, Rana Sanga came to be the most distinguished indigenous contender for supremacy but was defeated by the Mughal invader Babur at Battle of Khanwa in 1527. From as early as the 16th century, Purbiya Rajput soldiers from the eastern regions of Bihar and Awadh, were recruited as mercenaries for Rajputs in the west, particularly in the Malwa region.

After the mid-16th century, many Rajput rulers formed close relationships with the Mughal emperors and served them in different capacities It was due to the support of the Rajputs that Akbar was able to lay the foundations of the Mughal empire in India. Some Rajput nobles gave away their daughters in marriage to Mughal emperors and princes for political motives. For example, Akbar accomplished 40 marriages for him, his sons and grandsons, out of which 17 were Rajput-Mughal alliances. Akbar’s successors as Mogul emperors, his son Jahangir and grandson Shah Jahan had Rajput mothers.The ruling Sisodia Rajput family of Mewar made it a point of honour not to engage in matrimonial relationships with Mughals and thus claimed to stand apart from those Rajput clans who did so.

Akbar’s diplomatic policy regarding the Rajputs was later damaged by the intolerant rules introduced by his great-grandson Aurangzeb. A prominent example of these rules included the re-imposition of Jaziya, which had been abolished by Akbar. However,despite imposition of Jaziya Aurangzeb’s army had a high proportion of Rajput officers in the upper ranks of the imperial army and they were all exempted from paying Jaziya The Rajputs then revolted 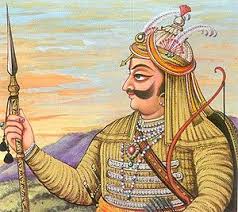 The medieval bardic chronicles (kavya and masnavi) glorified the Rajput past, presenting warriorhood and honour as Rajput ideals. This later became the basis of the British reconstruction of the Rajput history and the nationalist interpretations of Rajputs’ struggles with the Muslim invaders. James Tod, a British colonial official, was impressed by the military qualities of the Rajputs but is today considered to have been unusually enamoured of them. Although the group venerate him to this day, he is viewed by many historians since the late nineteenth century as being a not particularly reliable commentator. Jason Freitag, his only significant biographer, has said that Tod is “manifestly biased”.

The Rajput practices of female infanticide and sati (widow immolation) were other matters of concern to the British. It was believed that the Rajputs were the primary adherents to these practices, which the British Raj considered savage and which provided the initial impetus for British ethnographic studies of the subcontinent that eventually manifested itself as a much wider exercise in social engineering.