On November 1, 1858, a grand Darbar was held at Allahabad. Here Lord Canning sent forth the royal proclamation which announced that the queen had assumed the government of India. This proclamation declared the future policy of the British Rule in India.

The Queen’s Proclamation of 1858 assured the Indian Princes that their territories will not be annexed by the British Governments and they shall be given the right to adoption. A Durbar was held by Lord Canning at Allahabad on 1st November, 1858 to declare the assumption of the Government of India by the Crown. On that occasion Lord Canning also had read out the Queen’s proclamation to the princes and people of India.

The British Government ordered its servants in India not to interfere in the religious affairs of the Indians. In framing and administering law in India, due regard was to be shown to the customs, ancient rites and usages of the Indians. Indian subjects of Her Majesty were declared equal with the British subjects in other parts of the Empire. Equal rights and opportunities were guaranteed to the Indians along with other British subjects. Pardon and amnesty were offered to all those Indians who were still in arms against the British Government and who were not guilty of murder of British subjects. The treaties of the English East India Company were declared to be in force. The proclamation contained the following declaration about the Indians: “In their prosperity will be our strength, in their contentment our security and in their gratitude our best reward”. 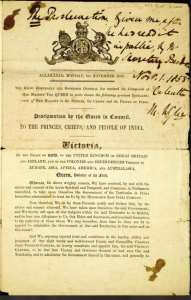 The proclamation of 1858 was a great landmark in the Constitutional History of India. This declaration of policy remained the basis of Indian Administration up to 1917 when a new declaration was made by the British Government with regard to India. The declaration tried to remove the fears of Indian princes by guaranteeing to them their position. It also gave an assurance to the Indians that the Englishmen will not interfere in their religious affairs.