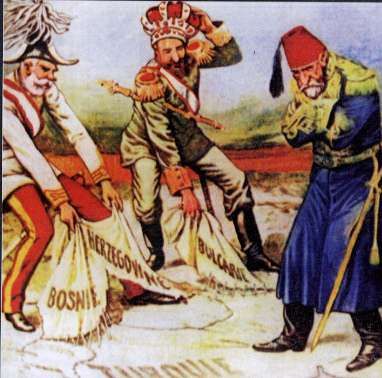 The crisis over Bosnia, a province of Turkey, brought the tension between Austria-Hungary and Serbia to fever pitch. In 1878 the Congress of Berlin had reached the rather confusing decision that Bosnia should remain officially part of Turkey, but that Austria-Hungary should be allowed to administer it. In 1908 there was a new government in Turkey, dominated by a group of army officers (known as Young Turks), who resented the Austrian presence in Bosnia and were determined to assert Turkish control over the province.

This gave the Austrians the chance to get in first: they announced the formal annexation (takeover) of Bosnia. This was a deliberate blow at the neighbouring state of Serbia, which had also been hoping to take Bosnia since it contained about three million Serbs among its mixed population of Serbs, Croats and Muslims. The Serbs appealed for help to their fellow Slavs, the Russians, who called for a European conference, expecting French and British support. When it became clear that Germany would support Austria in the event of war, the French drew back, unwilling to become involved in a war in the Balkans. The British, anxious to avoid a breach with Germany, did no more than protest to Austria-Hungary. The Russians, still smarting from their defeat by Japan, dared not risk another war without the support of their allies. There was to be no help for Serbia; no conference took place, and Austria kept Bosnia. It was a triumph for the Austro-German alliance, but it had unfortunate results: