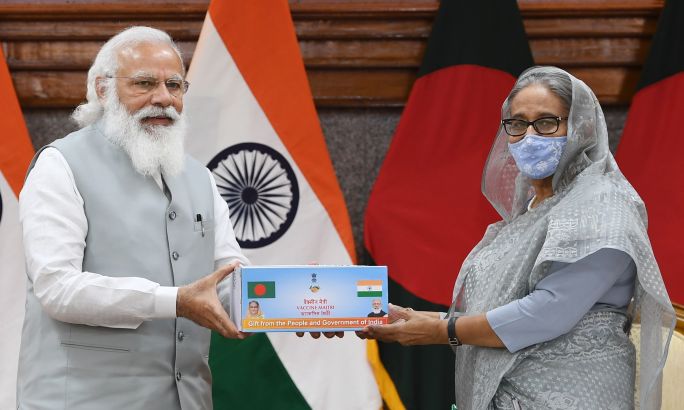 . Prime Minister Narendra Modi’s visit to Bangladesh to commemorate the 50th anniversary of the war of liberation and the centenary year of Sheikh Mujibur Rahman, and his meetings with Prime Minister Sheikh Hasina showcased the deep history the two nations share, their future plans and the challenges ahead. At the events, which included an emotive ceremony in Dhaka, a cultural programme, India’s conferring of the Gandhi Peace Prize posthumously on Mujib, and a visit by Mr. Modi to the Bangabandhu (Mujib) memorial at his hometown in Tungipara, the leaders paid homage to the nation’s founders, millions massacred by the Pakistani military regime in 1971, and those who died fighting for Bangladeshi freedom, including nearly 4,000 Indian soldiers. India’s role in the creation of Bangladesh was highlighted by Ms. Hasina as she thanked India for its aid, and later, for providing her shelter when members of her family, including her father Mujib, were assassinated. Mr. Modi wrote in an editorial of the hope for a Shonali Adhyaya (Golden Chapter) in South Asia that Bangabandhu may have brought about had he not been killed.

The two leaders built on their December 2020 (virtual) meet by bolstering plans for connectivity and infrastructure projects with a framework for cooperation on trade, along with other MoUs on sports, education and disaster management. India-Bangladesh ties in the past 15 years, since Ms. Hasina was elected, have been marked by new areas of cooperation and an ability to resolve specific differences. Ms. Hasina’s decision, beginning 2009, to shut down anti-India terror camps and to hand over nearly two dozen of India’s “most wanted”, reversed mistrust. Mr. Modi’s push to conclude the long-pending Land Boundary Agreement in 2015, and to accept an international tribunal verdict in favour of Bangladesh that resolved a 40-year-old maritime dispute, built confidence as well. Other issues, if unresolved, could pose challenges.