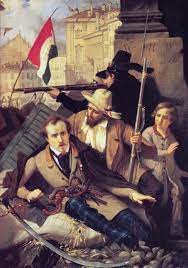 . Like Germany, Italy too had a long history of political fragmentation. Italians were scattered over several dynastic states as well as the multi-national Habsburg Empire. During the middle of the nineteenth century, Italy was divided into seven states, of which only one, Sardinia-Piedmont, was ruled by an Italian princely house. The north was under Austrian Habsburgs, the centre was ruled by the Pope and the southern regions were under the domination of the Bourbon kings of Spain. Even the Italian language had not acquired one common form and still had many regional and local variations.

During the 1830s, Giuseppe Mazzini had sought to put together a coherent programme for a unitary Italian Republic. He had also formed a secret society called Young Italy for the dissemination of his goals. The failure of revolutionary uprisings both in 1831 and 1848 meant that the mantle now fell on Sardinia-Piedmont under its ruler King Victor Emmanuel II to unify the Italian states through war. In the eyes of the ruling elites of this region, a unified Italy offered them the possibility of economic development and political dominance.

Chief Minister Cavour who led the movement to unify the regions of Italy was neither a revolutionary nor a democrat. Like many other wealthy and educated members of the Italian elite, he spoke French much better than he did Italian. Through a tactful diplomatic alliance with France engineered by Cavour, Sardinia-Piedmont succeeded in defeating the Austrian forces in 1859. Apart from regular troops, a large number of armed volunteers under the leadership of Giuseppe Garibaldi joined the fray. In 1860, they marched into South Italy and the Kingdom of the Two Sicilies and succeeded in winning the support of the local peasants in order to drive out the Spanish rulers.