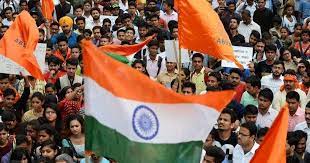 Apart from cultural nationalism and economic nationalism, there were other ways also in which the idea of Indian nationalism was being expressed. There came into being, in the second half of the 19th century, a thinking on Indian nationalism which was based on religion. It was leaders like Bankim Chandra Chattopadhyay, Dayanand Saraswati (who founded Arya Samaj in 1875). Vivekanand. and Arbindo Ghosh who made Hindu religion and its ideas the motivating force behind Indian nationalism. They looked upon the British presence in India as an attempt by the Western civilization to dominate the Indian civilization. They were completely opposed to this domination.

These leaders were convinced that although the British had succeeded in conquering India, the Eastern civilization was superior to the Western one. Bankim Chandra argued that although the British had conquered India with the help of military and technological superiority, Indians should not start blindly following it. He argued about the uniqueness of the Indian society where the ideas of Western civilization could not be applied. These leaders understood the Western civilization to be based on the ideas of individualism (rather than spirituality) and found them to be completely unsuitable for India. Vivekanand believed that the Western ideas had to be re-modelled according to the Indian situation. He said: “In Europe, political ideas form the national unity. In Asia religious ideas form the national unit.”

This understanding of nationalism based on religion had a political aspect also. Leaders like Bal Gangadhar Tilak wanted to take the idea of nationalism to the people. They knew that religion was a very important moral force in the Indian society. Hence they decided to use religion in the propagation of nationalist ideas. In order to be able to speak to people in their language, i.e. religious language, Tilak introduced the Ganapati festival in Maharashtra in 1893 to create a religious platform from where nationalist idea could be preached and spread.