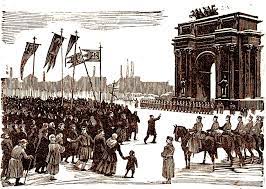 Russia was an autocracy. Unlike other European rulers, even at the beginning of the twentieth century, the Tsar was not subject to parliament. Liberals in Russia campaigned to end this state of affairs. Together with the Social Democrats and Socialist Revolutionaries, they worked with peasants and workers during the revolution of 1905 to demand a constitution. They were supported in the empire by nationalists (in Poland for instance) and in Muslim-dominated areas by jadidists who wanted modernised Islam to lead their societies.

When the procession of workers led by Father Gapon reached the Winter Palace it was attacked by the police and the Cossacks. Over 100 workers were killed and about 300 wounded. The incident, known as Bloody Sunday, started a series of events that became known as the 1905 Revolution. Strikes took place all over the country and universities closed down when student bodies staged walkouts, complaining about the lack of civil liberties. Lawyers, doctors, engineers and other middle-class workers established the Union of Unions and demanded a constituent assembly.

During the 1905 Revolution, the Tsar allowed the creation of an elected consultative Parliament or Duma. For a brief while during the revolution, there existed a large number of trade unions and factory committees made up of factory workers. After 1905, most committees and unions worked unofficially, since they were declared illegal. Severe restrictions were placed on political activity. The Tsar dismissed the first Duma within 75 days and the re-elected second Duma within three months. He did not want any questioning of his authority or any reduction in his power. He changed the voting laws and packed the third Duma with conservative politicians. Liberals and revolutionaries were kept out.