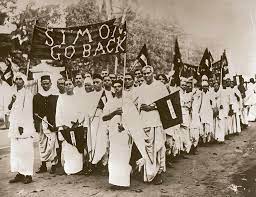 . Amidst this reformulation and resurgence of the revolutionary movement and the subdued state of the mainstream movement was announced the Simon Commission to formulate further constitutional reforms for India. The all-white commission did not include any Indian and thus it was clear that the forthcoming reforms, if any, would not fulfill the aspirations of the Indian people. Dyarchy had already shown itself to be a great farce with all the key decision-making powers still firmly in the hands of the colonial government. The announcement of the all-white Simon Commission sparked off widespread discontent and fanned the fires of the nationalist movement. All shades of political opinion in India unanimously condemned the Commission as not a single Indian was included in it.

The Indian response to the Commission was a unanimous resolution by leaders of every shade of opinion to boycott it. All the important cities and towns observed a hartal on the day that the members of the Commission landed in India (3rd February 1928). There were mass rallies and processions and black flag demonstrations against the Commission. ‘Go Back Simon’ was imprinted on banners, placards and even kites. Black flags were waved at the Commission wherever it went. Needless to say police repression was harsh and merciless and processions were attacked and not even the most prominent leaders were spared. The most insensitive attack was on Lala Lajpat Rai, one of the outstanding leaders of the extremist era in Lahore. This, now elderly, leader was hit by lathis and he succumbed to this attack a few days later. The death of Lajpat Rai created tremendous resentment against the British rule all over. During this period an important development within the Congress was the adoption of Purna Swaraj or complete independence as its objective. Complete independence meant a total severance from the British connection.