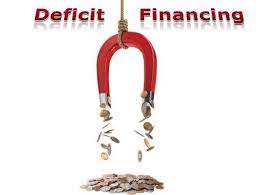 Deficit financing is a practice in which a government spends more money than it receives as revenue, the difference being made up by borrowing or minting new funds. Although budget deficits may occur for numerous reasons, the term usually refers to a conscious attempt to stimulate the economy by lowering tax rates or increasing government expenditures. The influence of government deficits upon a national economy may be very great. It is widely believed that a budget balanced over the span of a business cycle should replace the old ideal of an annually balanced budget. Some economists have abandoned the balanced budget concept entirely, considering it inadequate as a criterion of public policy.

Retail inflation in India already shot up to a five-and-a-half-year high of 7.35% in December, breaching the central bank’s tolerance limit of 6% and confirming fears raised by some economists that India is entering a phase of slow growth and rising prices.