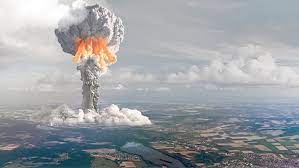 . Nuclear terrorism refers to any person or persons detonating a nuclear weapon as an act of terrorism (i.e., illegal or immoral use of violence for a political or religious cause). Some definitions of nuclear terrorism include the sabotage of a nuclear facility and/or the detonation of a radiological device, colloquially termed a dirty bomb, but consensus is lacking.

A power failure that appeared to have been caused by a deliberately planned explosion struck Iran’s Natanz uranium enrichment site in April, in what Iranian officials called an act of sabotage that they suggested had been carried out by Israel.

If so, Iran’s leverage in new talks sought by the Biden administration to restore the nuclear agreement could be significantly compromised. Iran has said it will take increasingly strong actions prohibited under the agreement until the sanctions imposed by President Donald J. Trump have been rescinded.

The explosion at Natanz struck barely a week after the United States and Iran, in their first significant diplomacy under the Biden administration, participated in the new talks in Vienna aimed at reviving the nuclear agreement abandoned by Mr. Trump, who described it as “the worst deal” and a giveaway to Iran.