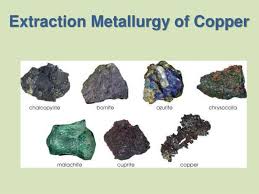 The commonest ore used in the extraction of copper is Chalcopyrite (CuFeS2) also known as Copper Pyrites and other such sulfides. The percentage of copper in the actual ore is too low for direct extraction of copper to be viable. The concentration of ore is required and it is done by the Froth Flotation method.

The ore is crushed into a fine powder and a suspension is created in water. To this are added, Collectors and Froth Stabilizers. Collectors (pine oils, fatty acids etc) increase the non-wettability of the metal part of the ore and allow it to form froth and Froth Stabilizers (cresols, aniline etc) sustain the froth. The oil wets the metal and the water wets the gangue. Paddles and air constantly stir up the suspension to create the froth. This frothy metal is skimmed off the top and dried to recover the metal.

Smelting is a metallurgy technique to extract base metals from their ores with the help of heat and a chemical reducing agent. (Click here for extraction process). Copper Smelting means that the concentrated ore is heated strongly with silicon dioxide (silica), calcium carbonate (CaCO3) and air in a furnace. The major steps in the extraction of copper are

The reaction of these processes can be written as:

The copper extracted from this process is mixed with the slag and is called Matte Copper due to its texture and appearance. This mainly consists of Cu2S which is reduced to pure metal by blasting Matte Copper with air.

The sulphur dioxide escapes the copper and this causes bubbles to appear and burst as SO2 leaves. This causes the final product to have a very blistery appearance and hence it is called Blister Copper; 98 – 99.5 % pure.

Copper is an outstanding conductor of electricity and combined with its ductility, it is the perfect metal to make electrical wiring, both domestic and industrial. The electronic Age would have been just a dream without this metal. To learn more in detail, register with Byju’s and download our app.