It is a process wherein the ore is heated either alone or with some other material in excess of air below the fusion point of the ore. Usually, this method is used for sulphide ores. In roasting, definite chemical changes take place to form oxide or chloride of the metal. Ores of metals like zinc, lead, copper and nickel, when roasted in air, are converted to their oxides. Ores of some metals like lead may get partially oxidized and converted to sulphate. In such case, it is called sulphating roasting or partial roasting. Ores of metals like silver and gold are mixed with common salt and are heated in air. They are converted to their chlorides which are easy to reduce. This type of roasting is called chlorinating roasting. The purpose of roasting is to convert the ore in a form suitable to reduce. The gaseous product of sulphide roasting, sulphur dioxide is often used to produce sulphuric acid. 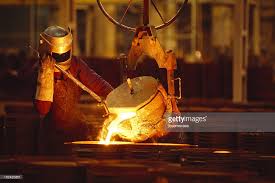 Smelting is the basic process by which one produces workable metal from metal ores. The minerals in copper ores are reduced to copper through mixing carbon with the ore and heating the combination to about 1,100°C. (This can be done directly with copper oxide ores. Copper sulphide ores are heated in contact with air first.) At this temperature the metal, now liquid, flows to the bottom of the furnace, and the remaining matter (slag) floats to the top, whence it is removed. (Slag usually includes large amounts of silicon and related material and produces waste heaps of glass-like or cinder-like material.) Although this sounds straightforward, in antiquity, and especially before the invention of a bellows, it was difficult to attain the necessary temperature, and the extraction of copper from slag was in fact a difficult, messy, and extremely labor-intensive project.

Smelting produces a blob of metal (called bloom) prepared for the next step. In the case of copper, that step is often casting.

Iron has a higher melting point than copper. But below its melting point iron can still become spongy and amenable to treatment by hot hammering (forging), which helps to extract some of the remaining impurities.

Metals obtained by reduction processes still contain some objectionable impurities and hence have to be refined. Refining techniques vary widely from metal to metal and also depend on the use to which a metal has to be put. Sometimes during refining some substances may have to be added to impart some desirable characteristics to the metal. In some cases a metal is refined to recover valuable by-products present as impurities. Some of the refining processes used are defined below.

Readily fusible metals like Sn, Pb and Bi are refined by this method. Impure metal in the form of ingots blocks in the upper part of a sloping hearth (usually of a reverberatory furnace) maintained at a temperature slightly above the melting point of the metal.

Readily fusible metals like Sn, Pb and Bi are refined by this method. Impure metal in the form of ingots blocks in the upper part of a sloping hearth (usually of a reverberatory furnace) maintained at a temperature slightly above the melting point of the metal. The impurities remain behind as dross while the pure metal melts and flows down into a well at the bottom of the incline.

This method employed to purify silver containing lead as an impurity. The impure silver is heated in a shallow vessel made of bone-ash under a blast of air. The lead is easily oxidized to powdery lead monoxide. Most of it is carried away by the blast of air. The rest melts and is absorbed by the bone ash cupel. Pure silver is left behind. Silver itself is not oxidized under these conditions.

Some metals have very low melting point and soon vaporize on heating while the associated impurities remain the solid state. Zinc, mercury and arsenic are purified by this method. Vacuum distillation gives very pure product and is used in the refining of the metals of IA and IIA.

This process is applied for the separation of cadmium from zinc. In the metallurgy of zinc, the metal is invariably associated with cadmium. The impure zinc is mixed with powdered coke and heated when the first portion of the condensate contain cadmium while zinc is obtained in the subsequent portions.

This is used for getting ultra pure metals. The principle involved is to convert the metal to a volatile unstable compound and to subsequently decompose it to give the pure metal. The impurities present should be such as not to be affected. Metals like titanium, zirconium etc. are purified by using this method.

Meals of very high purity can be obtained by this method by removing an impurity, which shows difference in solubility of the liquid and solid states of the metal. A circular heater is fitted around a rod of impure metal and is slowly moved down the rod. At the heated zone, the rod mellts and as the heater passes on, pure metal crystallizes while impurities pass into the adjacent molten part. In this way, the impurities are swept over one end of the rod, which is finally discarded. The heater may have to be moved from one end to the other more than once. Ge, Si and Ga are used as semiconductors are refined in this manner; gallium-arsenide and indium-antimonide are also zone refined.