By some accounts, Taxila was considered to be one of the earliest (or the earliest) universities in the world. Others do not consider it a university in the modern sense, in that the teachers living there may not have had official membership of particular colleges, and there did not seem to have existed purpose-built lecture halls and residential quarters in Taxila, in contrast to the later Nalanda university in eastern India.  Taxila became a noted centre of learning (including the religious teachings of Buddhism) at least several centuries BCE, and continued to attract students from around the old world until the destruction of the city in the 5th century. It has been suggested that at its height, Taxila exerted a sort of “intellectual suzerainty” over other centres of learning in India and its primary concern was not with elementary, but higher education. Generally, a student entered Taxila at the age of sixteen. The ancient and the most revered scriptures, and the Eighteen Silpas or Arts, which included skills such as archery, hunting, and elephant lore, were taught, in addition to its law school, medical school, and school of military science. Students came to Taxila from far-off places such as Kashi, Kosala and Magadha, in spite of the long and arduous journey they had to undergo, on account of the excellence of the learned teachers there, all recognised as authorities on their respective subjects.

Taxila had great influence on Hindu culture and the Sanskrit language. It is perhaps best known for its association with Chanakya, also known as Kautilya, the strategist who guided Chandragupta Maurya and assisted in the founding of the Mauryan empire. Chanakya’s Arthashastra (The knowledge of Economics) is said to have been composed in Taxila itself. The Ayurvedic healer Charaka also studied at Taxila. He also started teaching at Taxila in the later period. Pāṇini, the grammarian who codified the rules that would define Classical Sanskrit, has also been part of the community at Taxila. The institution is significant in Buddhist tradition since it is believed that the Mahāyāna branch of Buddhism took shape there.[citation needed] Jivaka, the court physician of the Magadha emperor Bimbisara who once cured the Buddha, and the Buddhism-supporting ruler of Kosala, Prasenajit, are some important personalities mentioned in Pali texts who studied at Taxila.

Nalanda was an acclaimed Mahavihara, a large Buddhist monastery in the ancient kingdom of Magadha (modern-day Bihar) in India. The site is located about 95 kilometres (59 mi) southeast of Patna near the town of Bihar Sharif, and was a centre of learning from the fifth century CE to c. 1200 CE. It is a UNESCO World Heritage Site. The highly formalized methods of Vedic learning helped inspire the establishment of large teaching institutions such as Taxila, Nalanda, and Vikramashila which are often characterised as India’s early universities. Nalanda flourished under the patronage of the Gupta Empire in the 5th and 6th centuries and later under Harsha, the emperor of Kannauj. The liberal cultural traditions inherited from the Gupta age resulted in a period of growth and prosperity until the ninth century. The subsequent centuries were a time of gradual decline, a period during which the tantric developments of Buddhism became most pronounced in eastern India under the Pala Empire.

At its peak, the school attracted scholars and students from near and far with some travelling from Tibet, China, Korea, and Central Asia. Archaeological evidence also notes contact with the Shailendra dynasty of Indonesia, one of whose kings built a monastery in the complex.  Much of our knowledge of Nalanda comes from the writings of pilgrim monks from East Asia such as Xuanzang and Yijing who travelled to the Mahavihara in the 7th century. Vincent Smith remarked that “a detailed history of Nalanda would be a history of Mahayanist Buddhism”. Many of the names listed by Xuanzang in his travelogue as products of Nalanda are the names of those who developed the philosophy of Mahayana. All students at Nalanda studied Mahayana as well as the texts of the eighteen (Hinayana) sects of Buddhism. Their curriculum also included other subjects such as the Vedas, logic, Sanskrit grammar, medicine and Samkhya. 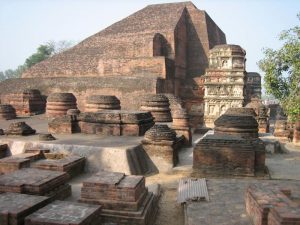 The decline of Nalanda is concomitant with the disappearance of Buddhism in India. When Xuanzang travelled the length and breadth of India in the 7th century, he observed that his religion was in slow decay and even had ominous premonitions of Nalanda’s forthcoming demise.[69] Buddhism had steadily lost popularity with the laity and thrived, thanks to royal patronage, only in the monasteries of Bihar and Bengal. By the time of the Palas, the traditional Mahayana and Hinayana forms of Buddhism were imbued with Tantric practices involving secret rituals and magic. The rise of Hindu philosophies in the subcontinent and the waning of the Buddhist Pala dynasty after the 11th century meant that Buddhism was hemmed in on multiple fronts, political, philosophical, and moral. The final blow was delivered when its still-flourishing monasteries, the last visible symbols of its existence in India, were overrun during the Muslim invasion that swept across Northern India at the turn of the 13th century.

Vikramashila was one of the two most important centres of learning in India during the Pala Empire, along with Nalanda. Vikramashila was established by King Dharmapala (783 to 820) in response to a supposed decline in the quality of scholarship at Nalanda. Atisha, the renowned pandita, is sometimes listed as a notable abbot. It was destroyed by the forces of Muhammad bin Bakhtiyar Khilji around 1200.  Vikramashila (village Antichak, district Bhagalpur, Bihar) is located at about 50 km east of Bhagalpur and about 13 km north-east of Kahalgaon, a town in Bhagalpur district . It is approachable through 11 km long motorable road diverting from NH-80 at Anadipur about 2 km from Kahalgaon.

A number of monasteries grew up during the Pāla period in ancient Bengal and Magadha. According to Tibetan sources, five great Mahaviharas stood out: Vikramashila, the premier university of the era; Nalanda, past its prime but still illustrious, Somapura, Odantapura, and Jagaddala. The five monasteries formed a network; “all of them were under state supervision” and there existed “a system of co-ordination among them. It seems from the evidence that the different seats of Buddhist learning that functioned in eastern India under the Pāla were regarded together as forming a network, an interlinked group of institutions,” and it was common for great scholars to move easily from position to position among them. Vikramashila was founded by Pāla king Dharmapala in the late 8th or early 9th century. It prospered for about four centuries before it was destroyed by Bakhtiyar Khilji along with the other major centres of Buddhism in India around 1200. Vikramashila is known to us mainly through Tibetan sources, especially the writings of Tāranātha, the Tibetan monk historian of the 16th–17th centuries.Vikramashila was one of the largest Buddhist universities, with more than one hundred teachers and about one thousand students. It produced eminent scholars who were often invited by foreign countries to spread Buddhist learning, culture and religion. The most distinguished and eminent among all was Atiśha Dipankara, a founder of the Sarma traditions of Tibetan Buddhism. Subjects like philosophy, grammar, metaphysics, Indian logic etc. were taught here, but the most important branch of learning was tantrism.