Indian National Army, also known as the Azad Hind Fauj, was formed for the liberation of India from the British rule. It was formed in South-East Asia in the year 1942 by pioneering Indian Nationalists and prisoners who wanted to throw off the yoke of foreign domination and liberate the country. The INA was initially formed under Mohan Singh, after the fall of Singapore, the captain in the 1/14th Punjab Regiment in the British Army. However, the first INA under Mohan Singh collapsed and finally it was revived under the leadership of Subash Chandra Bose in 1943. Bose`s army was declared as the Azri Hukumat e Azad Hind. Indian National Army emerged along with Mahatma Gandhi`s peaceful resistance movement within India. In contrast to Mahatma Gandhi, Bose advocated a more aggressive confrontation with the British authorities.

INA was formed during the first world war when the Ghadar Party and the emergence form of the Indian Independence League planned to rebel in the British Indian Army from the Punjab through Bengal to Hong Kong. However, this plan met with failure after the information was leaked to British Intelligence. During the Second World War, the plan to fight the British found revival and a number of leaders and movements were initiated. These included the various “liberation armies” which were formed in as well as with the help of Italy, Germany as well as in South-east Asia. Thus in South East Asia the concept of the Indian National Army emerged. It was supported by the Japanese 15th army and led by Bose.

Composition of the Indian National Army

Indian National Army had many valued freedom fighters that helped in the battles. They all had a brilliant background and fought for a similar cause, freedom of India. The INA freedom fighters were from every sphere ranging from barristers to plantation workers. The revival of the Indian National Army was done by Subhash Chandra Bose. Most of the people who joined the army had no prior military experience and thus to ensure a well-trained army, Bose established an Officers Training School for INA officers and the Azad School for the civilian volunteers Many youth were also sent to the Imperial Military Academy in Japan for advanced training. Every soldier was required to spend about six to eight hours of training daily. The training included physical training, army drill and handling arms such as rifles, pistols, hand grenades and bayonets. The soldiers also attended lectures of Indian and world history and military subjects like map reading as well as signaling. 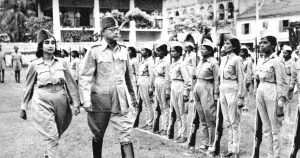 The battles that were fought by the Indian National Army during World War II were fought in the South-East Asian region. The operations include Malayan Campaign in 1942 as well as Burma Campaign. The operations of the INA involved the battle of Imphal, Kohima, Pokoku and Irrawady River operations. It began a long march over land and on foot towards Bangkok, along with Subash Chandra Bose. At the time of Japan`s surrender in September 1945, Bose left for Manchuria to attempt to contact the advancing Soviet troops, and was reported to have died in an air crash near Taiwan. On the other hand the INA fighters were imprisoned. The prisoners faced the death penalty, life imprisonment or a fine as punishment if found guilty.

Indian National Army was structured in a way that lodged active participation from women. A women regiment was formed in 1943. INA had John Thivy, Dr. Lakhsmi Sehgal, Narayan Karruppiah as well as Janaki Thevar as its members. Among the masses attending Bose`s rally on 9 July, Dr.Lakshmi, responded immediately to his appeal to form a Women`s Regiment. She visited many families to persuade the women to join the INA. Many were reluctant; however, she managed to gather twenty enthusiastic girls who were willing to break the traditional barriers. The girls presented the guard-of-honour to Bose. He was impressed and invited Dr. Lakshmi to lead the Women`s Regiment. On 12 July 1943, Bose announced the formation of the Women`s Regiment, naming it “Rani of Jhansi Regiment” which in later years was considered to be a special characteristic of the INA. INA fighters were not invited to join the Indian Army after India`s independence. However, a few ex-INA members later have seen prominent public life or held important positions in independent India. The Indian National Army thus rose to power under the able leadership of Bose. Though it was ultimately disbanded, its heroic attempts at forming an army and taking a radical step towards Indian Independence marked a significant step in the Indian Independence Movement.

Subhas Chandra Bose was most dynamic leader of India`s struggle for independence. He is more familiar with his name Netaji. His contribution towards India`s Freedom struggle was of a revolutionary. Subhas Chandra Bose was born on 23rd Jan, 1897 in Cuttack, Orissa, India. From his childhood he was a bright student and was a topper in the matriculation examination from the whole of Kolkata province. He graduated from the Scottish Church College in Kolkata with a First Class degree in Philosophy. Influenced by the teachings of Swami Vivekananda, he was known for his patriotic zeal as a student. He went to England to fulfil his parents` desire to appear in the Indian Civil Services. He stood fourth in order of merit. But he left civil Service`s apprenticeship and joined India`s freedom struggle.

During his service with the Indian National Congress, he was greatly influenced by Bal Gangadhar Tilak and Sri Aurobindo. He did not agree with Gandhiji`s methods of achieving Independence through non-violence. He believed that the only way of achieving Independence was by shedding blood. He therefore returned to Kolkata to work under Chittaranjan Das, the Bengali freedom fighter and co-founder of the Swaraj Party. He was imprisoned for his revolutionary activities on various occasions. In 1921, Bose organized a boycott of the celebrations to mark the visit of the Prince of Wales to India for which he was imprisoned for the first time. Bose was elected to the post of Chief Executive Officer of the newly constituted Calcutta Corporation in April 1924. That same year in October, Bose was arrested on suspicion of terrorism. At first, he was kept in Alipur Jail and later he was exiled to Mandalay in Burma. Bose was once again arrested on January, 1930. After his release from jail on September 25, he was elected as the Mayor of the City of Kolkata. Netaji was imprisoned eleven times by the British over a span of 20 years either in India or in Rangoon. During the mid 1930s he was exiled by the British from India to Europe where he championed India`s cause and aspiration for self-rule before gatherings and conferences. Throughout his stay in Europe from 1933 to 1936, he met several European leaders and thinkers. He travelled extensively in India and in Europe before stating his political opposition to Gandhi. Subhash Chandra Bose married Emilie Schenkl, an Austrian born national, who was his secretary, in 1937 in German. Bose wrote many letters to Schenkl of which many have been published in the book “Letters to Emilie Schenkl”, edited by Sisir Kumar Bose and Sugata Bose.

Subhas Chandra Bose became the president of the Haripura Indian National Congress against the wishes of Gandhiji in 1938. He was elected as the president for two consecutive terms. Expressing his disagreement with Bose, Gandhi commented “Subhas` victory is my defeat”. Gandhi`s continued opposition led to Netaji`s resignation from the Working Committee. He was left with no alternative but to form an independent party, the “All India Forward Bloc”.

In his call to freedom, Subhas Chandra Bose encouraged full participation of the Indian Masses to strive for independence. Bose initiated the concept of the “National Planning Committee” in 1938. His correspondence reveals that despite his clear dislike for British subjugation, he was deeply impressed by their methodical and systematic approach and their steadfastly disciplinarian outlook towards life. The contrast between Gandhi and Bose is captured with reasonable measure in a saying attributable to him “”If people slap you once, slap them twice”. Having failed to persuade Gandhi for the mass civil disobedience to protest against Viceroy Lord Linlithgow`s decision to declare war on India`s behalf without consulting the Congress leadership, he organised mass protests in Kolkata. The disobedience was calling for the `Holwell Monument` commemorating the Black Hole of Kolkata. He was thrown in Jail and was released only after a seven-day hunger strike. Bose`s house in Kolkata was kept under surveillance by the British. With two pending court cases; he felt that the British would not let him leave the country before the end of the war. This set the scene for Bose`s escape to Germany, via Afghanistan and the Soviet Union. In Germany he instituted the Special Bureau for India under Adam von Trott zu Solz, broadcasting on the German-sponsored Azad Hind Radio. Here he founded the “Free India Centre” in Berlin, and created the Indian Legion consisting of some 4500 soldiers who were the Indian prisoners of war. The soldiers had previously fought for the British in North Africa prior to their capture by Axis forces.