Assam is located in the northeast of India. The state shares its borders with Arunachal Pradesh, Nagaland, Manipur, Mizoram, Meghalaya, Tripura and West Bengal. The state shares international borders with Bangladesh and the Kingdom of Bhutan. Assam is India’s gateway to Northeast India and acts as a vital link for trade with Southeast Asian countries. The state is known for its tea, petroleum resources, muga silk and bio-diversity. It is also becoming an increasingly popular destination for wildlife tourism.

The Assam economy and development depend on the production of the state. The economy is prevalently agrarian in nature. The government makes continuous efforts to develop the already existing agrarian economy and to improve the other sectors of the economy in the state of Assam. Almost 63 percent of the society of Assam earns its living from the agricultural sector. The state is reputed all over the world for its production of tea. The state produces 15 percent of the tea produced in the world. A large section of the labor force of the state is employed in the tea estates of Assam that cover large areas of the state. The other agricultural produce involves rice, sugarcane, pulses, potatoes and jute. Fruits like mangoes, bananas, pineapple and guavas are also produced in the state.

The secondary sector of the economy comprises of the industries in Assam with large and medium scale productions. Agro based industries prevail in the state coupled with the tea industry that has a major contribution to the economy of the state of Assam. Other industries include the petroleum industry with one of the oldest oil ventures of the world situated in Digboy. The state also earns revenue from the mining industry that produces the four important industrial minerals of coal, limestone, sillimanite and oil. 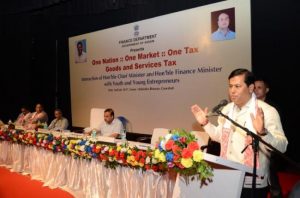 During 2015-16, the state government provided Assam State Electricity Board (ASEB) with US$ 1.52 million for the electrification of quarters of the Tea Workers. The state government has proposed to construct a Tea Museum in Dibrugarh, in 2016-17.

The Assam-Arakan Basin in Northeast India is an important oil-producing region and contains more than 15 per cent of the country’s reserves. Assam has over 1.3 billion tonnes of crude oil and 156 billion cubic metric tonnes of natural gas reserves.