The severity of flood problem of the state has been further aggravated by the acuteness of erosion on both banks of river Brahmaputra and its tributaries. Study reveals that an area of 4.27 Lakh Hectare of the state has been eroded by the rivers since 1950, which is 7.40 % of area of the state. The average annual rate of erosion is 8000.00 Ha. The world’s largest river island Majuli is also under the grip of erosion by river Brahmaputra and about 60 % of its original area has already been engulfed by the river.

The Brahmaputra Valley has an average width of about 80 Km. The main river of the valley, Brahmaputra is one of the largest rivers in the world and rank fifth with respect to its average discharge. The river originates from the Kailalsh ranges of Himalayas at an elevation of 5300 M. After flowing through Tibet it enters India through Arunachal Pradesh and flows through Assam and Bangladesh before it joins Bay of Bengal.  The catchments area of Brahmaputra in Tibet is 2,93,000 Sq. Km; in India and Bhutan is 2,40,000 Sq. Km and in Bangladesh is 47,000 Sq. Km. The Brahmaputra basin extends over an area of 5,80,000 Sq. Km up to its confluence within Bangladesh.  The average width of Brahmaputra is 5.46 Km. The maximum discharge of Brahmaputra at Pandu near Guwahati was recorded as 72,779 cumec on 23.08.62 and minimum discharge was recorded as 1757 cumec on 22.02.63. The average annual discharge is about 20,000 cumec and average dry season discharge is 4,420 cumec.  The river slope is very steep till it enters India. A drop of about 4800 M is achieved in a length at about 1700 Km in China (Tibet). This average slope of about 2.82 m/Km gets reduced to about 0.1m/Km in Assam valley. Due to this sudden flattening of river slope, the river becomes braided in nature in the Assam valley. During its course in Assam valley from Kobo to Dhubri the river is joined by about 20 (twenty) important tributaries on its North bank and 13 (thirteen) on its South bank. Joining of these tributaries bringing high sediment load activates braiding.  Brahmaputra sub-basin extends over an area of 580,000 sq.km lying in Tibet (China), Bhutan, India and Bangladesh. The drainage area lying in India is 194413 sq.km which is nearly 5.9% of the total geographical area of the country. It is bounded on the north by the Himalayas, on the east by the Patkari range of hills running along the Assam-Burma border, on the south by the Assam range of hills and on the west by the Himalayas and the ridge .separating it from Ganga sub-basin. The sub-basin lies in the States of Arunachal Pradesh, Assam, Nagaland, Meghalaya, West Bengal and Sikkim. 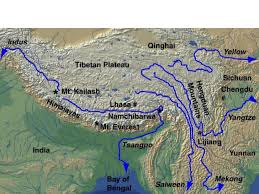 All the tributaries of the valley area are rain fed and foam up with rain. The precipitation here is mainly due to South West monsoon. Heavy precipitation occurs here from May to September. All its tributaries experience number of flood waves as per rainfall in respective catchments. If the flood of the tributaries coincides with the flood of Brahmaputra, it causes severe problem and devastation. The tributaries namely Subansiri, Ronganadi, Dikrong, Buroi, Borgong, Jiabharali, Dhansiri (North) Puthimari, Manas, Beki, Aie, Sonkosh are the main tributaries on the North while the Noadehing, Buridehing, Desang, Dikhow, Bhogdoi, Dhansiri (South), Kopilli, Kulsi, Krishnai, Dhdhnoi, Jinjiran are the main tributaries on the south bank of the river Brahmaputra. The characteristics of the north bank tributaries are different than that of the south bank tributaries, which may be summarized as below –

Have very steep slopes and shallow braided channels for a considerable distance from the foot      hills and in some cases right up to the outfall.

Have boulder, pebble and coarse sandy beds and carry a heavy silt charge.

Besides these, there are several other small streams also which drain directly to the river.

Some important tributaries of Brahmaputra :

Teesta River : Teesta River is lifeline of Sikkim and makes a border between Sikkim and West Bengal before joining the Brahmaputra as a tributary in Bangladesh. The total length of the river is 315 kilometres.

Manas River : Manas River folows in India and Bhutan and is the largest river system of Bhutan. Three other river systems of Bhutan are Amo Chu or Torsa, Wong Chu or Raidak, Mo Chu or Sankosh. It is met by three other major streams before it again debouches into India in western Assam.

Dhansiri river : Dhansiri is the main river of Golaghat District of Assam and the Dimapur District of Nagaland. It originates from Laisang peak of Nagaland. It flows through a distance of 352 kilometres (219 mi) from south to north before joining the Brahmaputra on its south bank. Its total catchment area is 1,220 square kilometres (470 sq mi).

(B) Barak river system :  The Barak River is one of the major rivers of South Assam and is a part of the Surma-Meghna River System. It rises in the hill country of Manipur State, where it is the biggest and the most important of the hill country rivers. After Manipur it flows through Mizoram State and into Assam, ending just after it enters Bangladesh where the Surma and Kushiyara rivers begin. In Assam, the Barak has a total length of 225 km and it drains the southern part of the state which includes the districts of Cachar, Karimganj, Hailakandi and the southern part of the Noprth Cachar Hills. The valley has a width of 25-30 km and it covers an area of 6962 sq. km accounting for about 9% of the total geographical area of the state. The plain, usually known as Cachar Plain is a narrow, and slopes gently to the west. Through the plain, the river flows sluggishly for a distance of 125 km and exhibits a highly meandering pattern. The important north bank tributaries of Barak river are Jiri, Siri, Madhura, Jatinga and Larang, while the important south bank tributaries include Sonai, Ghagra, katakhal, Dhaleswari, Singla and Longai.

The Barak valley has a geographical area of 6922.00 Sq. Km excluding 2(two) hill districts. The local rainfall run off of the valley along with that of adjacent hilly areas flows through river Barak and its various tributaries and is drained out to Bangladesh. The Katakhal, Jiri, Chiri, Modhura, Longai, Sonai, Rukni and Singla are the main tributaries of the valley. The tributaries are mainly rain fed and cause flood problems when precipitation occurs.  The Barak sub-basin drains areas in India, Bangladesh and Burma. The drainage area of the sut lying in India is 41723 sq.km which is nearly 1.38% of the total geographical area of the country. It is be on the north by the Barail range separating it from the Brahmaputra sub-basin, on the east by the Na Lushai hills and on the south and west by Bangladesh. The sub-basin lies in the States of Meghalaya. Manipur, Mizoram, Assam, Tripura and Nagaland.