In this category there are five rights

Each one of these six freedoms is subject to some restrictions. For rights can never be absolute. Individual rights must be reconciled with the interests of the community. It is logical that equal rights for all must mean limited rights for any. Hence, the state may impose ‘reasonable restrictions’ upon the exercise of any of these rights.

Firstly, the state may impose restrictions on the exercise of the right to freedom of speech and expression on eight grounds. These are:

Secondly, the freedom to assemble is subject to two restrictions. The assembly must be peaceable and the members of assembly must not bear arms. However the Sikhs are allowed to carry ‘Kirpan’ as part of their religious creed. In the U.S.A. right to bear arms is fundamental right. In India, this right is denied in the interest of public order.

Thirdly, the right to form associations or unions does not entitle persons to enter into criminal conspiracy either against individuals, groups or against the state.

Fourthly, the right to move freely or to reside and settle in any part of India, does not cover trespass into homes or restricted areas. State also may restrict this freedom to protect the aboriginal tribes.

Power of Courts to enforce freedom of citizens of India

Every Indian citizen has the power to move the High Court or the Supreme Court for protecting and securing his personal freedom. The Courts are empowered to issue writs in the nature of habeas corpus. The courts can order the presence of detained or imprisoned person and set him free in case there is no legal justification for his detainment or imprisonment.

Rights to Freedom during National Emergency

The rights to freedom under Article 19 of Indian constitution are suspended during the period of National Emergency declared by the President of India.

Further, during the period when the National emergency is in operation, the President is empowered to suspend the right of citizens to move the Supreme Court for the enforcement of their personal freedom.

Each one of the fundamental freedoms guaranteed by the constitution of India is hedged by many restrictions. They are not absolute. This led to the criticism that Indian freedom is a myth and not reality for what has been given with one hand has been taken away with the other.

This criticism is unfair. For fundamental rights can nowhere be absolute. For logically, one can be absolutely free only when all others are absolute, slaves Individual freedom to be real must be social and hence must be limited.

On the whole fundamental rights everywhere are restricted or, limited. As Mr. Justice Mukherji observed in A. K. Gopalan vs. State of Madras case” There cannot be any such thing as absolute or uncontrolled liberty wholly freed from restraints.”

These freedoms are however not without limitations.

Include  freedom of conscience and freedom of religion. Citizens are free to profess and practice any religion. These provisions make India a secular state.

Include right to protection of language, script and culture given to the minorities. The minorities are also given the right to establish and administer educational institutions of their own.

Provides for enforcement of fundamental rights through the judicial process.Dr BR Ambedkar  expressed it to be the heart and soal of Indian constitution. 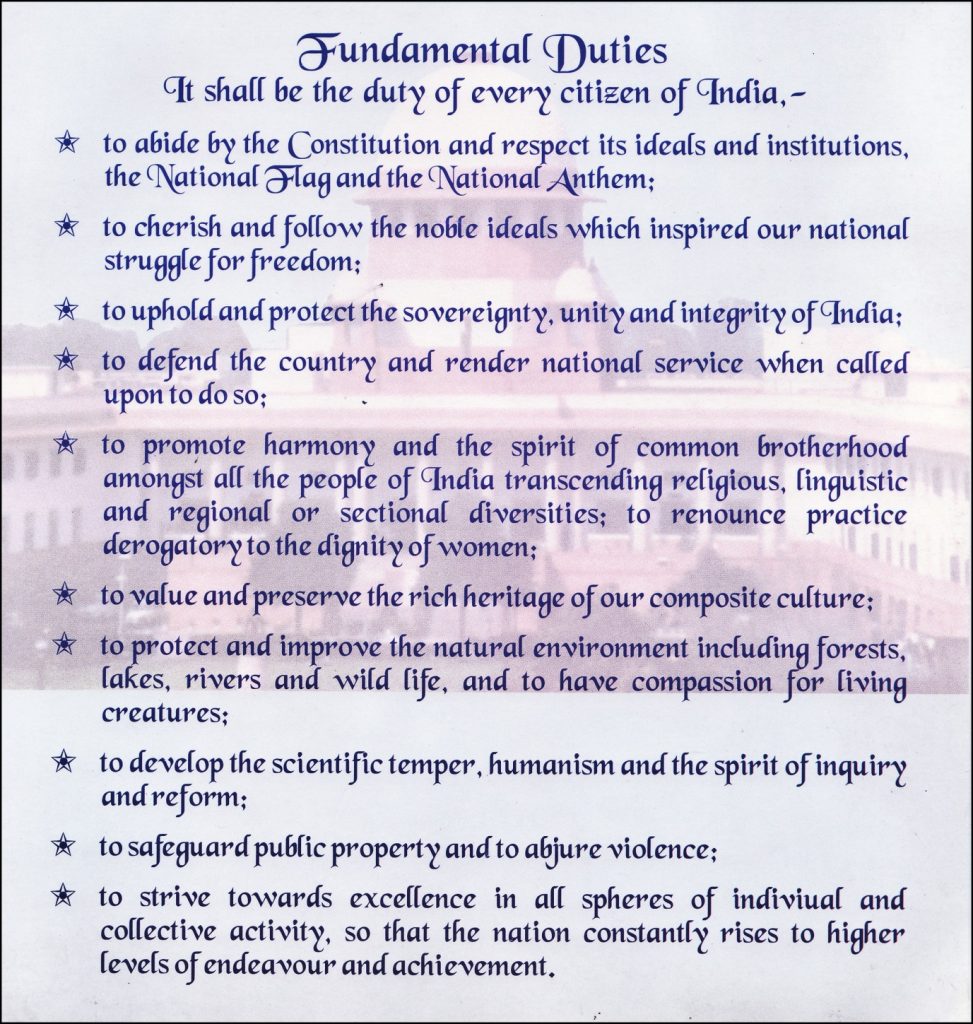 Part IV-A was added by the 42nd Amendment Act, 1976. It encompasses Part IV, Article 51A enu­merating Ten Fundamental Duties of the Citizens of India.

There is no provision in the Constitution for direct enforcement of any of these Duties nor for any sanction to prevent their violation.But it may be expected that in determining the Consti­tutionality of any law, if a Court finds that it seeks to give effect to any of these duties, it may consider such law to ‘be reasonable’ in relation to Article 14 or 19, and thus save such law from unconstitutionality.